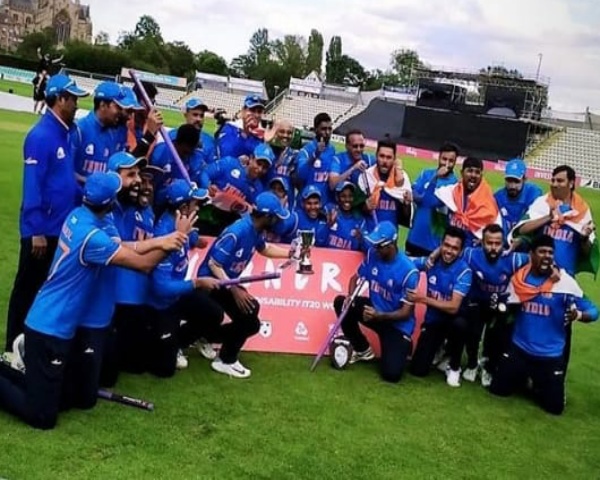 A triumphant India Divyang Cricket Team will return to Mumbai on 18 August having made a clean sweep of the first ever Physical Disability T20 World Series in England. The win, hope supporters of the game, will win some cash rewards as well as more substantial support for the team.

India was unbeaten right through the tournament which saw the participation of five other countries. From the Indian cricket board Board of Control for Cricket in India to senior government ministers, the good wishes are still pouring in. The team is scheduled to meet with Maharashtra Chief Minister Devendra Fadnavis upon their return. They will rest for two days in Mumbai after which the players will return home. Two of the players are from Jammu and Kashmir and they are understandably anxious about meeting their families.

“My heartiest congratulations to the India Divyang Team for the win the finals”, tweeted Anurag Thakur. “Their magnificent performance on the field and fighting spirit has made every Indian’s head high”.

The players and its association, All India Cricket Association for the Physically Challenged (AICAPC) hope the win will lead to more substantial support. AICAPC general secretary Ravi Chauhan said the BCCI should honour the cricketers with cash awards and continued support in the future.

The BCCI is the parent body and they must support the disabled cricketers just like they support blind cricketers. They gave the players the opportunity to take part in the world series and we appreciate that but the players have lived up to the faith shown in them with this win. The board has supported us only for this tournament but after this win, they must extend that. – Ravi Chauhan, General Secretary, All India Cricket Association for the Physically Challenged

In 2017, the BCCI had rewarded every member of India’s Blind World Cup-winning team with ₹ 15 lakh each. Chauhan points out that the other four countries that took part in the world series – England, Pakistan, Afghanistan and Bangladesh – were supported by their cricket boards. India was the only exception.

“When all the other participating countries are supported by their cricket boards, why not us?. The BCCI must look at backing us long term. Besides the BCCI constitution talks about forming a committee for disabled players that would be managed by people with different disabilities. It is time they acted on this”, he adds.

The AICPAC had to bear all the expenses of the team’s trip to the United Kingdom for the series. A financial rewards, said team captain Vikrant Keni would be deserved. “We don’t need sympathy. We are from poor backgrounds but that has not some in the way of winning recognition for India”.

Diana Edulji, member of the Committee of Administrators (CoA) is among those to congratulate the team. “We are proud of our boys. Well done. God bless,” she said. Hopefully these are signs that the cricket board will finally give the players the honour due to them.