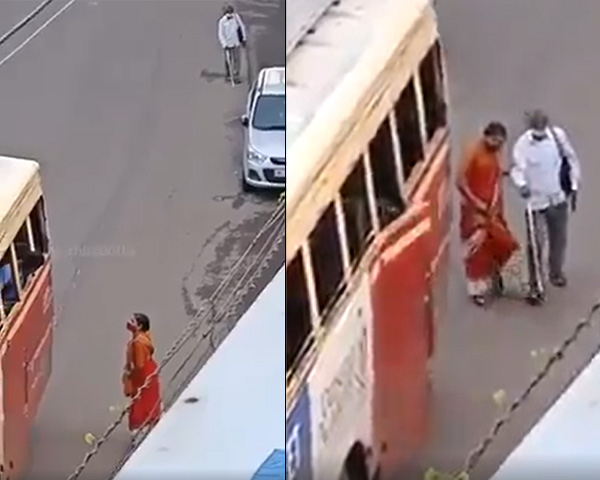 Supriya, a salesperson at a textile shop at Tiruvalla in Kerala recently helped a visually impaired man board a bus. Her act of kindness has gone viral on social media after the video was shared by many. It is people like Supriya who makes the world a better place to live in, points out many social media users.

A small act of kindness can go a long way, especially during these tough times. Last week, a video of a woman helping a visually impaired man board a bus in Kerala had gone viral on social media. Many prominent personalities shared the video to point out how kindness is beautiful. The woman in the video was identified as Supriya who works as a salesperson at a textile shop in the town of Tiruvalla. Joshua is the man who shot the video.

In the video, Supriya runs behind a bus and asks them to stop it so that an elderly, visually impaired man whom she spotted on the road can board it. She urges the conductor to wait a little longer while the man can be seen walking slowly towards the bus with the help of his cane. Supriya then rushes to him, holds his hands and helps him board the bus.

A man named Joshua, who was standing atop a building nearby, shot the video on his mobile phone. He then shared it on social media and within a few hours, it went viral.

Supriya was reportedly leaving for work at Jolly Silks, a prominent textile shop in Tiruvalla when she spotted the elderly, visually impaired man who needed help. In fact, Jolly Silks shared the video on their Facebook page saying, “When we say we’re here for you, we mean it and our staff are shining examples of that maxim. Our staff member Supriya was heading to work one morning, when she saw an aged and differently-abled man, unable to board a bus. She ran behind the bus, stopped it and helped him get safely on board. Only then did she leave to resume her duties. We are immensely proud of you, Supriya”.

In an interview to Malayalam channel Mathrubhumi, Supriya says, “When I spotted the elderly man, he was on the middle of the road walking and almost going to be hit by a vehicle. I ran and helped him move to the side. I enquired where he wants to go. Soon, a bus came and they stopped as well. So I could help him board it”.

Love was showered on Supriya from across the world. This act of kindness is what is needed in the world right now.

“We should all aim to be like her when no one is watching. #Salute”, tweeted actor Riteish Deshmukh.

“She made this world a better place to live.kindness is beautiful!”, tweeted Vijayakumar IPS.

“I wish the lady, who stopped the bus to help the blind man board it, gets lots of happiness in her life. Loooots of! God please. And may we all learn from her to be human enough”, tweeted entrepreneur and speaker Ravinder Singh.

“When the world is filled with all kinds of negativity right now, this type of kindness & empathy is what we’re craving for Internet lauds this kind woman who stopped a bus only so a blind man can get in”, tweeted a social media user Nausheen Khan.