An optimist, wheelchair user Vishnu Das is not ready to back down in life 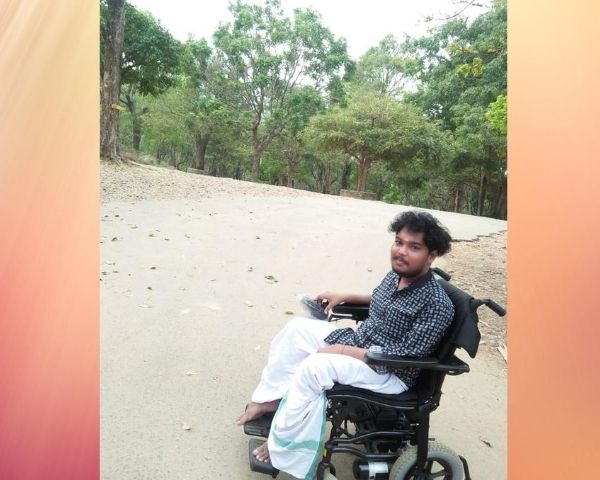 Vishnu Das from Kerala was diagnosed with Spinal Muscular Dystrophy (SMD), but is determined to live life to the fullest. Someone who aspires to land a government job, Vishnu is never ready to give up. He is optimistic, positive and loves to look at the brighter side of life, a quality which many lack in today’s world.

Vishnu Das, 26 years old, hails from Thrissur in Kerala. He was diagnosed with Spinal Muscular Dystrophy (SMD), but needs further diagnosis including a biopsy to know which type he of SMD he belongs to. But he has been unable to take the tests due to financial constraints. Vishnu, who is a wheelchair user, dreams of landing a government job to make his life secure along with that of his family too. Active in social work, a singer and someone who loves to spend time with family, Vishnu is determined to make the best out of life.

As a child, Vishnu never had it easy. He used to frequently fall down and was unable to sit properly. His family thought that it was a childhood problem which can occur in any child. But as the condition remained constant even after a few years, they decided to consult him to a doctor where he was first diagnosed with SMD. The doctor told Vishnu’s family that his condition was life-long and there were no medicines for it.

But like every family, Vishnu’s too hoped that he would be able to get up and walk. While studying in class 8, Vishnu remembers, a group of so-called ‘healers of all diseases’ paid a visit to Vishnu’s hometown. They gave him some apparently herbal medicines to heal, asked Vishnu to rest for a week and then asked him to visit them again.

“For a week, I took complete bed rest. When I tried to get up after that, I couldn’t do it. Till then, I was able to walk a little bit. Everything stopped. After so many years, I still don’t blame them. I couldn’t walk because according to my condition, I should have kept moving”, he says.

But Vishnu refused to give up. He dreamt big. He completed his class 10 from a nearby school and then pursued his BA in History through distance education.

Vishnu is currently the Thrissur Coordinator of NGO MIND that works towards empowering people with spinal muscular dystrophy and atrophy. He is also working on writing the Kerala Public Service Commission (PSC) exams so that he can land a dream job at a government office. “I applied for a few posts without taking any preparations. But I want to work hard for it now”, says Vishnu, who is always optimistic about life.

Someone who loves to sing, Vishnu’s songs can add to the fun of any gathering. He has performed at various venues.

Vishnu’s family comprising of parents, sister and her family ensures that he always remain in good spirits.

In spite of financial crunches, Vishnu says there is no space for sadness in his life. He was provided with an electric wheelchair by a Chennai NGO after which he has been able to go outdoors.

Vishnu’s mother Rema says, “Vishnu’s diagnosis was initially a shock to us. We wondered what he would do in the future. But now, we are glad that he has found the path to empowerment. When he is happy, we all are happy”.