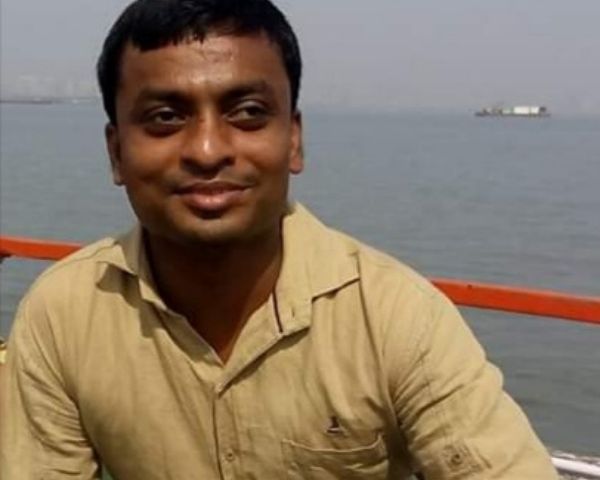 Kailash Tandel, a visually impaired Ph.D. student at the Indian Institute of Technology Bombay-Monash Research Academy has raised over two lakh rupees to help the Mumbai’s fishing community access essential commodities and other basic supplies during the coronavirus lockdown.

After Prime Minister Narendra Modi declared the first lockdown, Kailash Tandel, a visually impaired Ph.D. student at the Indian Institute of Technology, Bombay-Monash Research Academy had to move out of the campus hostel. Kailash shifted to his parents’ home in Machimaar Nagar, an area in Colaba that is home to the Kolis, Mumbai’s traditional fishing community.

Kailash, whose father and brother are fisherman, is a first-generation Ph.D. student in his family. Back home, he met Bhagwan Vival, an auto rickshaw driver, who had run out of money to buy food supplies for his family as the lockdown had affected his business.

“When Bhagwan told me his difficulties, I realised that no one was thinking about the hardships facing the people in the koliwadas or fishing communities”, says Kailash, who lost his vision at nine to retinitis pigmentosa.

Kailash turned to a department at IIT-B to raise funds for Bhagwan. Within a day he had collected ₹5,000. That led him to think of doing this on a larger scale.

Initially I waited to see if any political representatives or community leaders are reaching out to people in the koliwadas. When I saw no such effort, I started collecting funds to help the fisherfolk. It took me a few days to work out the details and I reached out to IIT-B as well as organisations I had networked with in the past like the NGO Yuva and the Tata Institute of Social Sciences (TISS). – Kailash Tandel, Visually impaired researcher

Reaching out to fisherfolk across Mumbai

Within a period of a few weeks Kailash put together a band of 15 volunteers. They created a database of disabled people, the elderly and widows in the community and started reaching out to them.

Over the last two-and-a-half months, Kailash and his team have helped 920 families in his locality and other koliwadas. “Access to essential supplies is just one of the challenges faced. Another major issue is maintaining physical distancing in these densely packed areas. We conduct awareness camps and distribute sanitation kits, so people protect themselves”.

As a Koli, Kailash is deeply committed to his community and has done research projects on the issues facing them. Yet, he faced some scepticism from community leaders. “They looked at me with suspicion at first and thought I was working at the behest of some political leaders. I paid no attention and continued with my work”.

Kailash is inspired by Dr Ambedkar

Kailash’s source of inspiration is Dr B R Ambedkar. Babasaheb’s quote, “When someone is criticising you, it means you are progressing” is something I always keep in my mind.”

Kailash’s work got noticed and commended by the Board of Directors of the IITB-Monash Research Academy, an Indian Australian research partnership. In a letter they praised his work in “bringing the most vulnerable into the grid of access. The letter goes on to say:

“Kailash is truly deserving of special commendation. Having lost sight in both eyes at an early age, he has constantly sought ways to rise above his circumstances and find innovative alternate means to succeed, guide by what he refers to as the three A’s of his life – Acceptance, Affordability and Accessibility”

Kailash and his team have reached out to people in the adjoining districts of Palghar as well as other coastal areas. He is overwhelmed by the support he is getting from people, even those outside India.

“I am happy to show the world that a person can achieve anything regardless of disability. My lack of vision does not make me any different from anyone else”, he adds.