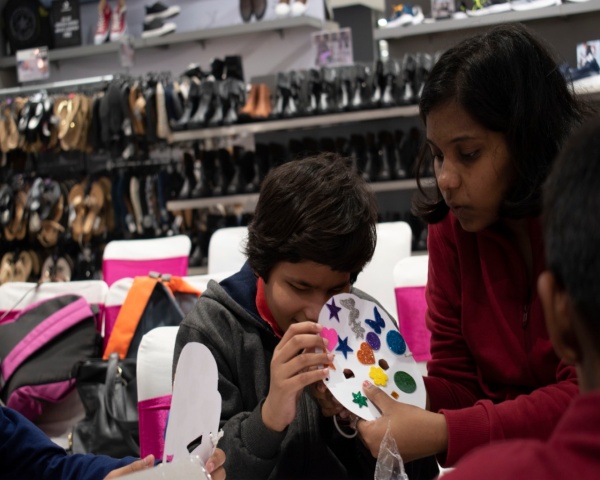 As a special treat on Children’s Day, a large group of visually impaired children got to experience the wonders of India’s new map with the help of TouchVision. Developed by techie Ankita Gulati, the device narrates the content in the picture when a visually-impaired person touches it.

Many happy faces were seen and cries of wonder and delight heard at an Interactive Reading and Tactile Art Worksop for Visually Impaired Kids organised on Children’s Day. From the redrawn contours of India’s map, which has changed post Article 370 to games, over 20 visually impaired children got to learn something new and have fun with the aid of TouchVision.

A device developed by Ankita Gulati, TouchVision narrates the content in the picture when a visually-impaired person touches it. Ankita got the idea of developing the device when she saw a teacher at a blind school talk about the Indian states using a single handmade tactile map.

The device Ankita has developed is way cheaper and easier to use than comparable devices that are available in the market.

As a special treat on Children’s Day, a large group of visually impaired children got the opportunity to use TouchVision at the Big Bazaar store in Vasant Kunj, New Delhi. Big Bazaar is trying to introduce visually impaired shoppers to technology. Store employees participated enthusiastically in the various games and activities.

There were 20 children between the ages of 7 to 11 years who attended the workshop on Children’s Day. Apart from the new India map, they also got to play games like an inclusive Tic Tac Toe. The children had a blast doing all these activities and we wanted to break this perception people have that visually impaired children cannot play or experience fun. – Ankita Gulati, Developer, TouchVision

The children were present along with their families and there were plenty of emotional moments witnessed. One mother, who does not wish to be named said, “I have two children, a son who is visually impaired and my daughter who is sighted. I never imagined I would see a day when they would play together and do an activity together. TouchVision has enabled that”.

TouchVision has been launched in five states in India across some schools. Ankita launched 100 units to begin with to see the feedback. An improved version, she calls version two, will be available soon.

The device has a foldable stand that is used to position a smartphone camera for scanning tactile material. A pointer ring on the user’s index finger is used to read the text. Through an app, the smartphone provides simultaneous audio to the user as per the user’s finger’s location. The label and description of the diagrams are narrated as per the finger gestures of the user.

TouchVision is cheaper than similar devices that are available in the United States and the United Kingdom. “Even the ones with interactive graphics are expensive and the additional devices cost over US$ 3,000. We have developed our own tactile graphics and a portable stand. All you need is a phone app and you are set to go.”

For Ankita, the Big Bazaar workshop was not just an opportunity to showcase her device but to create awareness. There were a range of activities planned to ensure the visually impaired children could have a good time. There was an art activity where children were given shapes and asked to create works of art based on the shapes.

Ankita has plans to conduct more workshops like these. “I plan to call sighted children the next time I do this”, says this young techie whose commitment to inclusion is quite remarkable. “I am doing this to make people aware and the whole idea of conducting such a workshop in a live shopping situation where the public is out and about is to shatter the perceptions and stereotypes about visually impaired people. It is to show the world that they love to play and are a part of everything”.