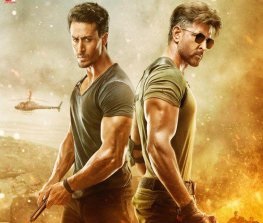 Hrithik Roshan and Tiger Shroff starrer latest movie War has crossed the 100 crore-mark within three days of its release.

War has become Yash Raj Film’s fifth production to earn over 100 crores within three days of its release after Dhoom 3, Sultan, Tiger Zinda Hai and Thugs of Hindostan.

The Hindi version of War movie earned 96 crore while the Tamil and Telugu versions have collected a total of 4.15 crore so far and is still going strong.

Film critic Taran Adarsh tweeted,”#War continues its dream run… Day 3 [Fri] – a working day and coming after two days of big biz – shows no signs of weakening or slowing down… Now it’s up to the two days of weekend – Sat and Sun – to add to a solid extended weekend total.”

played by Tiger Shroff has been trained by Kabir is tasked with finding and killing Kabir. The movie also stars Vaani Kapoor, Ashutosh Rana, Soni Razdan , Arif Zakaria among others.

War is an action packed entertainer with some amazing dance and action sequences by the two lead actors and has been directed by Siddharth Anand.
It has become one of the most successful movies of Hrithik Roshan and Tiger Shroff’s career.

Actor Twinkle Khanna tweeted,” Thrilled for my friend @iHrithik where he is smashing the box office with his #War Good things happen to good people:)”