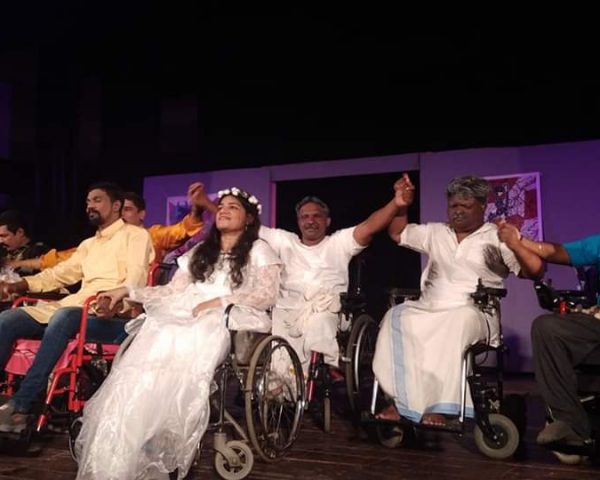 The first performance of theatre group Freedom on Wheels was held early this year in March. A group of wheelchair users in Kerala came together to start a drama troupe, first-of-its-kind in India, and their performances truly won hearts. Titled Chaya, a group of nine wheelchair users have been performing at various venues across the state. Now, they are all set to put up a great show at the prestigious Surya Festival.

The event is scheduled to happen on 14 October at Trivandrum which is one of the venues for the festival. The team of wheelchair users have been rehearsing and working on it for the past many days to ensure that they put up nothing short of a splendid performance. Many renowned artists and celebrity guests are expected to check out the performance.

Unni Maxx, co-founder, Freedom on Wheels says that they are looking up to this as an opportunity to reach out to a bigger audience.

Surya Festival is one of the world’s biggest art festivals which in 2017 spans 111 days and features over 2000 artists from across India. Undoubtedly, this is a big event in Kerala. We are happy, proud and excited to be part of it. Our show is scheduled for next Monday and we are working on putting up a good performance-Unni Maxx, Co-founder, Freedom on Wheels.

The drama ‘Chaya’ has a social theme and is directed and scripted by VT Ratheesh. Their first performance at Town Hall in Kochi last March won them a huge fan following. The event was attended by Malayalam film superstar Jayasurya and Ernakulam District Collector K Mohammed Safirulla. Ever since then, there has been no turning back for these youngsters who are gearing up to scale bigger heights. “The entire team is both happy and excited that we got such a big venue like Surya festival to perform. There are many artists from across India and we are looking up to this as an opportunity. All of us are a little bit nervous too”, says Anjurani Joy, one of the performers.

Undoubtedly, a disability does not stop these youngsters from breaking records and performing at more venues.