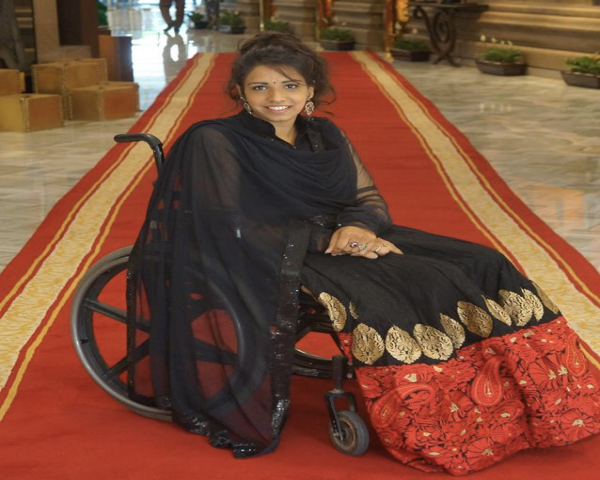 Paralysed in an accident when she was 10 years old, Geet is among the biggest stars on TikTok, the social media video app that is so popular among Indian youth. Geet has two channels, one for English lessons and the other where she shares relationship advice. Geet, who wanted to be an actress, is showing the world that being in a wheelchair need not come in the way of achieving fame and popularity.

An accident cut short Sangeeta Jain childhood dreams of becoming an actress. Paralysed from the wait down at the age of 10, Sangeeta became a wheelchair user. She tried participating in reality TV shows for kids but found opportunities were limited because of her disability.

With her brother’s encouragement, Sangeeta started doing motivational videos on Facebook, where she has her own page under the name Geet Jain. Then in February 2018, she made her debut on TikTok were she put up short comedy videos that she made with her grandmother.

“To my surprise, it was the motivational videos that did better”, said Geet to The Hindu. “We had videos on socially relevant topics like domestic violence, saas bahu relationships, and confidence. I was getting thousands and views and comments even within the first few weeks,”

Geet, who spent her childhood in the United States speaks Hindi with an American accent. Soon she found herself getting requests from people to explain the meanings of certain words. That led her to start a channel on TikTok where she gives lessons in spoken English.

Today Geet has two channels on TikTok, English with Geet and TheOfficialGeet. She has over 2.5 million followers and her videos are short, crisp and has language that is easy to follow.

Geet has studied engineering and law and divides her time between India and Seattle, United States. She runs an NGO in Delhi-NCR where she works with children living in slums, teaching them positive values through music, storytelling and dance.

Everyday, Geet puts up three to five videos where she reaches out to different types of audiences. She also talks about sensitive issues like domestic violence. “The audience on TikTok is raw and open. Seeing them respond to me feels like I’m making a difference,” she said in an interview.