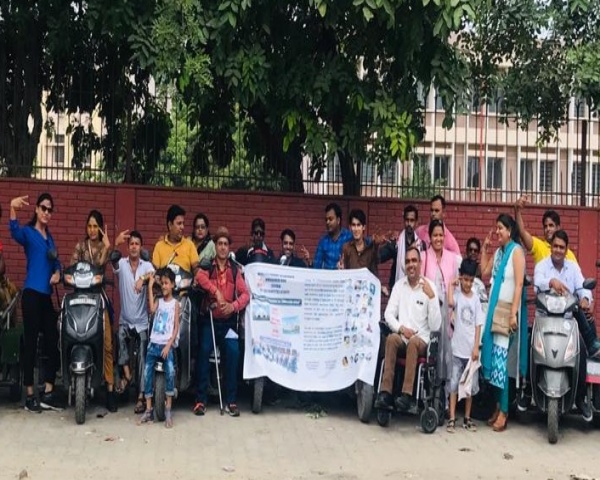 An accessible awareness ride that aims to make the disabled community understand the importance of education has been announced. The drive will begin in New Delhi on 1 October.

Twenty people with physical disabilities from across India have come together to announce an accessible awareness ride. The 3,500-km ride will cover seven states and aims to underline the importance of creating accessible infrastructure, especially in schools and colleges.

The ride will start on 1 October at the iconic India Gate in New Delhi and end at the same venue on 15 October. All the participants will be on retrofitted scooters and the main objective, says Ride Coordinator Aameer Siddiqui is to encourage people with disabilities to enhance and empower themselves through education.

A computer assistant at Jamia Milia Islamia University in New Delhi, Aameer says that even today education opportunities are hard to come by for people with disabilities. Aameer, who is from Fatehpur, rural Uttar Pradesh, and says the situation is still dismal in small town India.

I was luckier than many other people because my father was an enlightened man and ensured that I studied like everyone else. Otherwise most disabled people in rural India either end up begging or sitting at home. We want to change the scenario by driving through small towns and talking to the disabled community and spread awareness. – Aameer Siddiqui, Ride Coordinator

Statistics bear this out. A report by the United Nations Educational, Scientific and Cultural Organization (UNESCO) and the Tata Institute of Social Sciences released early this year says that more than one in four disabled children between five to 19 years have never attended any educational institution. Three-fourths of five-year-olds with disabilities are not in school.

Mahi Chauhan, the only female rider in the group, who works as a manager at an orphanage in New Delhi, hopes to motivate disabled girls, who are even more in the shadows. “When I step out of Delhi, I can see how poor the condition is. “Disabled girls don’t know their rights and are not even allowed to step out of their homes. This is because they have never been motivated. Maybe when they see us, they will feel that disabled people can also do anything.

The biggest barrier, believes, Arshad, one of the participants, is lack of accessible infrastructure in schools. Arshad, who was struck by polio as a child, was repeatedly turned down by neighbourhood schools.

“Education is the only way to raise living standards and in the case of disabled people, lack of access is the major barrier”, says Arshad who has a business in readymade garments in north east Delhi. “In my case, my father being an educated man, was keen that I study but local schools would say no because either classes were on the upper storeys or teachers would say how will we take him to the washroom”.

Arshad finally managed to get admission into Amar Jyothi Charitable Trust, which is an inclusive school set up, but dropped out after class 5 as it was too far from home.

All the participants have pooled in their savings to raise the funds for the awareness ride. “We tried for sponsors but did not manage so decided to come together and raise the money needed”, adds Aameer. Clearly, the cause is one close to their hearts.

“In Delhi and big cities, things are still improving”, says Ramesh Chand, a government schoolteacher in Faridabad, who was struck by polio in childhood and has a masters’ degree and a B.Ed. “I managed to study but suffered a lot due to inaccessibility right through school and college”. Through the ride, he wants to tell disabled youth not to give up on higher aspirations. “Education can change their lives, enable them to live like everyone else. We want to get that message out as it is important”.