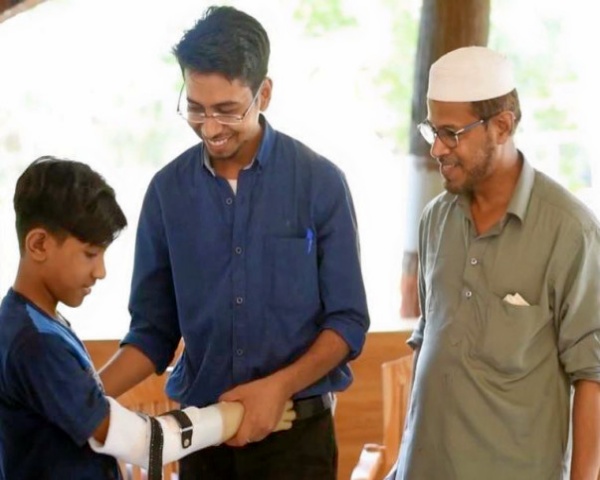 Every year in India over 40,000 people lose their arms and 85% of them live without any solution. Prashant Gade, developer of Inali Arm, a prosthetic arm that is affordable and easy to wear, is seeking support as he wants to reach 500 people with free prosthetic arms.

Twelve years after his left hand was cut off from the wrist following a train accident, Kartik Darya can now hold a glass of water in his left hand and drink from it. Amit Kumar can use his right hand nearly eight years after it was crushed while he was wielding an agricultural equipment.

“I cannot get over the joy of being able to use my left hand to do simple, basic things”, says Kartik, while Amit rejoices in the ability to use his right hand to write letters.

What has changed their lives? It’s Inali Arm, an easy to wear and affordable prosthetic arm developed by Prashant Gade, a young innovator. Now Prashant wants to reach people living without arms in rural India by providing them prosthetic arms for free under the Inali Foundation. The foundation provides electronic arms for free to people from economically marginalised backgrounds.

A year ago while I was traveling I saw a child with a missing limb and I asked him if he could come to Udaipur so I could fit him with a prosthetic limb. His father said he couldn’t bring him as he would lose his job and then who would provide for the family? That made me realise that there are so many people like this who find it hard to reach us because of their social and economic condition. So we decided to start this initiative. – Prashant Gade, Innovator, Inali Arm

It was a similar encounter like this in 2016 that led Prashant, who was in his early 20s at the time, to start working on developing a prosthetic arm. He met a seven-year-old girl with missing arms and moved by her condition, decided to gift her two prosthetic arms. The price quoted by the company he approached was ₹ 24 lakh.

“Can you even imagine how she would have been able to pay this”? he asks. “And when you consider that every tenth minute there’s an amputation in India and there are so many people who are living without their upper limbs when technology has the solution”. That led Prashant to drop everything else he was doing to create an electronic prosthetic arm.

Every month the Inali Foundation team travels to parts of rural India where they organise camps where the electronic arms are distributed for free to people in need. Until, now over 1,000 arms have been given. Now the team is looking for support from the public to reach out to 500 people with free prosthetic arms.

These funds will be used towards travel, accommodation and food for people who are reaching these camps from long distances, diagnoses, etc. “There are so many people in need and I want to make them smile”, says Prashant. “Life with a missing arm is a big deal for anyone and we want to ask people to come be a part of this initiative and help us make a difference to someone’s life”.