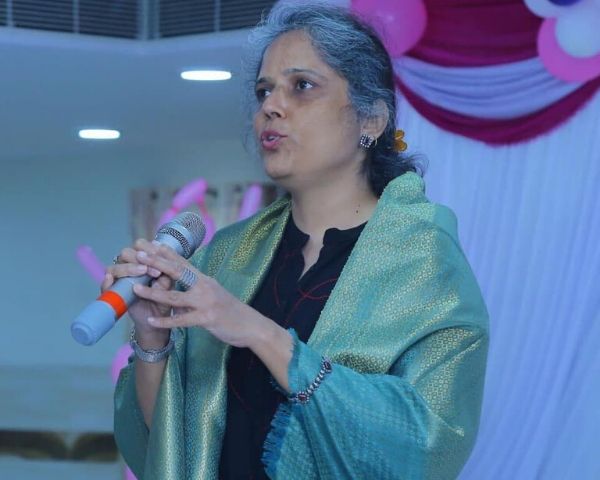 In this moving and inspiring piece, hotel management graduate and now Founder of YouTube channel Rasoi Ke Rahasya, Payal Kapoor talks about coming to terms with losing her vision in her 20s and forging a new path.

Twenty five years ago, I was a young, bright-eyed, hopeful 22-year-old with the future laid out clearly in front of me. Until, suddenly, it wasn’t.

In the span of one week in August 1992, my whole life was turned inside out when a cerebral attack left me totally blind. In the couple of months immediately afterwards, I lost touch with all of my senses — sight, hearing, taste, smell — and even touch, to a great extent. For months, I was bedridden, and needed help to carry out the most basic of daily tasks.

Mentally I was no longer the active, competent person I had been before. I was an emotional wreck, frightened beyond my wits. This left everyone around me shocked.

At first, it was difficult for me to communicate with non-disabled people. My new life was a devastatingly lonely, dark space. My friends from school and college had converged around me to commiserate and offer support. But eventually, as my recovery extended to months and then years, communication with them became infrequent, until there was none.

But I slowly recovered partial hearing and was able to start communicating with people again, and made friends with other people living with visual impairment.

Those were early days of technology; accessible technology was in its infancy. I learned how to read and write Braille and use assistive technology — the uphill trudge was tough, especially because I didn’t yet have access to mobile phones or email, and my world still remained bereft of all those old friends who had been a part of my life for years.

It wasn’t until 2007 that I had my first introduction to the PC and screen reader.

With the help of an older friend who is visually impaired, who I met through an organisation for the blind, I learned the basics of how to use applications, and signed up to my first list for the visually impaired. I felt relieved, even liberated, to have found a whole new virtual community.

At the same time, slowly but surely, I also made my way back into the world of non-disabled folks, by learning about virtual communication and the various media that made it possible. Facebook was where a lot of my lost friends waited for me.

Some of my friends from both school and college, who knew about my progress with technology, gently nudged me towards making my virtual identity known. The speed at which things happened soon after my Facebook account was created, felt like a dam had burst. A whole lot of friends who I had completely lost touch with suddenly reappeared in my life. Some stuck to virtual communication only, while others reached out and spoke with me on the phone.

Soon, meetings were planned and I was reintroduced to my school friends after close to ten years. While I was loved and included as a part of the group, I still stood apart in my disability.

When disability becomes an excluding factor

More recently, I met with friends from college at a reunion to mark 25 years of our graduation. I felt cocooned in the fierce love and admiration I received from them. I knew I was a survivor and a role model in their midst. Then why the flutter of unrest within me? Why the angst?

Many little things make disability an excluding factor. Those gestures I never catch, eye contact I never make, those stories of their lives, loves and children I will never be able to catch up to… then there are those increasingly regular virtual conversations that surround memes or silent videos that are everywhere day in and out. Everybody’s laughing about something that I’ve no clue of. It is both annoying and dismaying when you hear your screen reader say ‘image’ and nothing else tells you what is in it. A whole thread of conversations then follows, on how fantastic whatever was in that image I didn’t see, is!

Until recently, my mobile phone didn’t even read emojis, and all I heard was blank. There are a very small number of people who instinctively do the work of transcribing and explaining to me. While I love them for it, I know it is an extra effort!

There is only that much I can say to them about things that excite me, since a lot of it is related to disability and what is new in that world, such as the changing laws that will impact our lives, the latest in gadgetry and technology, exciting enabled travel options and workplace woes. Talking in mixed company about world affairs and all else is easy since I keep myself informed.

But how much of my world interests them? I find myself choosing my words carefully to ensure I don’t bore them with things I say. I remember sharing a link recently with my friends from college — many of whom are chefs — about a Bluetooth device controlling the cooking process, a safe and innovative idea for the blind, hoping to invite a conversation about it. But it was met with profound silence! It made me swear never to do it again.

On the other hand, I felt an increasing affinity with my friends with disability, many of whom I met through various networks for the blind. Each interaction was important and precious, each association special. First inducted to WhatsApp by sighted friends, I soon realised it was a fantastic tool to engage with my blind friends too.

With ever improving accessibility in the app, typing messages, dictating, sharing voice notes and emojis, my virtual presence is now like that of a sighted person’s. If anything, my sighted friends are amazed at the ease and speed with which I respond and just like them, use the visual features which the accessibility of the app allows.

Increasingly I have realised my disabled friends and I speak the same language, feel the same pain and read each other’s moods very well. New things that excite me — whether it is new technology, a new audio book or something I had discovered when cooking or an article related to disability I’ve read — interest them too. We unhesitatingly turn to each other for things we’d perhaps never be able to express to someone without a disability.

None of this means that my non-disabled friends are less important to me. It just means that one interaction is unhindered by ability, while in the other, I’m watching from the fringes.

I can’t help wondering — will disability ever stop being a dividing factor?

This article was first published in Skin Stories