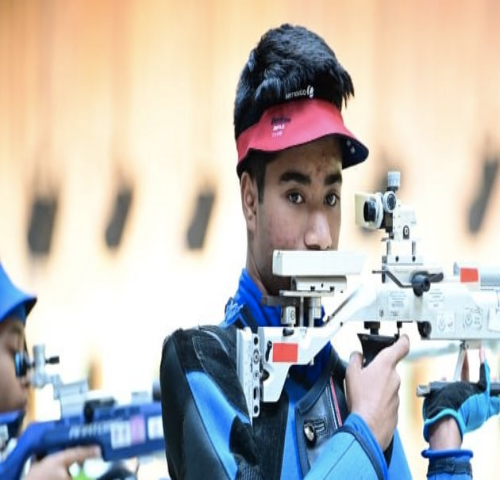 Deaf shooter Dhanush Srikanth has made history. The 16-year-old has made it to the junior under 21 men’s 10-m air rifle team for the Asian Championships in Doha in November this year. He is the first deaf shooter to make it to the national side ever.

Telangana boy wonder Dhanush Srikanth keeps setting one record after the other. This 16-year-old deaf shooter has made it to the Indian national squad, just two years after he took up shooing. Dhanush’s performance has earned him a place in the junior under-21 (U-21) men’s 10-m air rifle team for the Asian Championships in Doha in November this year.

Dhanush, who was born deaf, had recently set world records in the national trials. He scored 252.5 which is higher than the current senior final world record at 251.2. Dhanush trains at rifle shooter and Olympian Gagan Narang’s Guns for Glory academy in Telangana and Pune. Soon after his national performance, Narang had tweeted, “I wish him the best in his future endeavours. He is on his way to make it to the Indian Junior Team”, words that have proven prophetic.

Dhanush’s coach, Neha Chavan, a former national-level shooter said to Times of India, that his consistent performance has helped him achieve all his targets.

Dhanush first got national attention in January this year when he became the first deaf shooter to win a national medal in the regular category by topping the Khelo India Games. His mother Asha Srikanth says that Dhanush was raised like any other child and was never made to feel he was different from others. His interest in sports became evident at a young age.

At the age of 12, he had a black belt in taekwondo but because he wears a cochlear implant, we didn’t want him to continue because its a high impact sport. One day he saw a poster about Narang’s shooting academy and said he was interested. We weren’t very sure but we didn’t want to discourage him and he took it up seriously. – Asha Srikanth, Dhanush’s mother

Dhanush was sent to a regular school all through and encouraged to mingle with everyone else. ‘We encouraged him to be open and approach people with confidence and it is importance to have that kind of faith in your child”, says Asha. At Narang’s academy, tpp, he has received a lot of support and encouragement. Dhanush is able to speak with some ease and that has helped ease communication issues.

”It is hard to explain things like breathing pattern while shooting”, said Neha, finer nuances that Dhanush has been able to master by watching videos of other shooters. All that effort and patience shown by him and his coaches has now paid off.