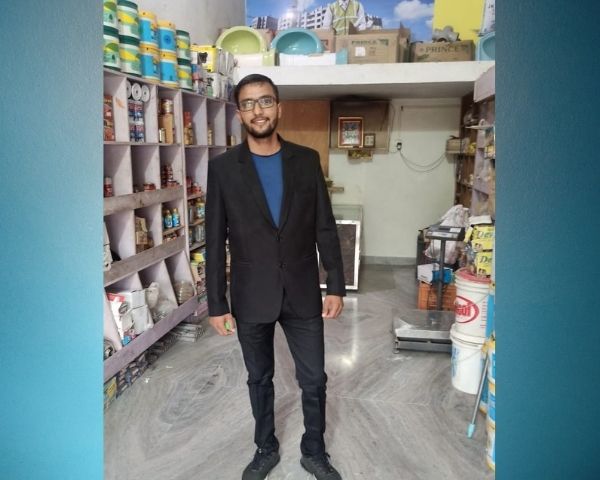 Ghewar Rebari, a 23-year-old visually impaired cricketer from Rajasthan has beaten many odds to become successful in life. An expert in fielding and batting, Rebari is the opening batsman for the Rajasthan blind cricket team. His life journey is all about determination and confidence.

“My family and friends have never looked at me as a person with disability. I always got the support that I needed”, says Ghewar Rebari, a visually impaired cricketer from Rajasthan. Ghewar lost his eye sight after a cricket ball hit his eye, but he has partial vision with the help of spectacles in the other eye. Ghewar says that his journey towards being a successful and independent man was not easy. But determination, confidence and will-power can do wonders.

Ghewar was born and brought up in a small town of Rajasthan. His childhood was spent with siblings and friends. Ghewar was passionate about cricket and loved playing the game. So whenever he got free time, he would run to the ground with his bat and ball. Unfortunately, during one of the games, the cricket ball hit his eye leaving him fully blind in one eye. He has partial vision in the other, but with the help of a powerful spectacle that he always wears. It was after surgeries at the age of 18 that he is partially able to see in one eye.

“Doctors had earlier said that nothing can be done to regain my eye sight. I opted or a surgery a few years back after which I can see partially in one eye”, he says.

Ghewar currently works for a government job, something he achieved with his own hard-work.

Ghewar’s tryst with cricket began at a young age. The game was always exciting for this youngster. So in spite of physical disabilities, he wanted to go with it.

He started playing for Rajasthan two years back and has been an important member of the team since then. Ghewar excels in batting and fielding. He is also the opening batsman of the team. Ghewar has played the Ranji and Nagesh trophies for blind cricket. “We are gearing up to play the next Nagesh trophy in Bengaluru in 2021. It was planned earlier, but had to cancel due to Covid crisis”, he says.

Ghewar plans to focus on his career, but cricket is life to him. “I want to play blind cricket and represent team India. That is my biggest wish. I also aspire to write civil service exams”, says Ghewar whose role model is Sunil Ramesh, blind cricketer of Karnataka team. ‘”I admire his game. He excels in fielding and batting”, adds Ghewar.

“Unfortunately, blind cricket doesn’t get any support from the government unlike cricket played by people without disabilities. More blind cricketers must get government jobs and they need to earn a respectable living too”, says Ghewar.