Sport taught me to accept myself, says para-cyclist Attila Oláh 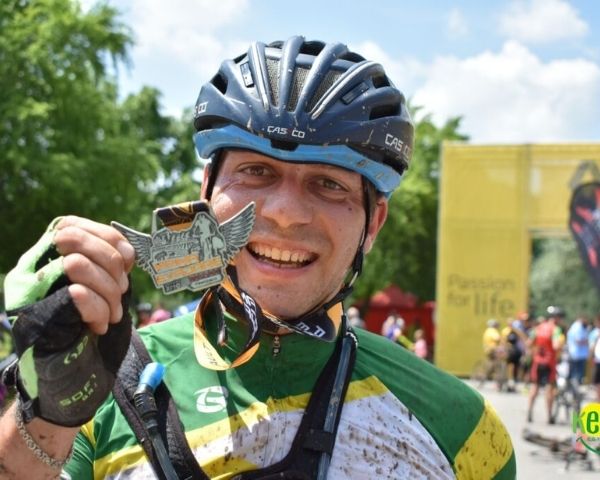 Attila Oláh, a para cyclist from Romania, has had to overcome the challenges posed by his own body, the environment and as well as people around him to fulfil his dreams of becoming a professional athlete. Attila has been wearing a prosthetic leg since the age of two and has competed in top international competitions, including the Paralympics.

“I don’t start my days by getting out of bed and walk around my apartment as I like”, says para cyclist Attila Oláh. “First, I have to put on my prosthetic leg, and then I can start the day. At the same time, the prosthesis is not as comfortable as a shoe; after a while, my leg gets tired, so I have to take it off and rest my leg. It also hinders me a lot in going from place to place: That is why I prefer to cycle everywhere”.

After birth, Attila’s left leg did not develop naturally and he had to wear a prosthesis from the age of two. Growing up was not easy for this athlete from Romania as he could not accept the fact that he was disabled. His environment didn’t help either: Someone made fun of him every day, and bullying him was a part of the daily routine in school as well.

Attila’s leg did not develop naturally

“I was the last person to be picked when we played team sports. Exactly as it is presented in the movies: When we played soccer, I was always sitting on the bench. I did not wear shorts until I was 21, I did not go to public pools, I was afraid to show up in front of people. For these reasons, I was shy and an introvert; I avoided people. I blamed everyone because they could not accept me, but the truth is, I should have accepted myself,” says Attila.

Attila was six when he learned how to ride a bike. “It went so quickly, without any help. I just went outside, to the streets, leaned against a fence, got on my bike, pushed myself away, and that was it.

In 2008, Attila met Paralympic champion Eduárt Novák Károly, who is also the manager of a professional cycling team. He invited Attila to be a member of his team. Two years later, Attila joined the team full time.

In the beginning, it was very hard for me to do 15 kilometres, but I didn’t give up, and I rode a few kilo-metres more the next day. I improved day by day, and in September of 2010, I participated in my first race, at the European Championship. I was at a disadvantage, as I had trained for only five months, while the other participants had been training for several years. However, I received two silver medals, which confirmed to me that it was worth it to continue. – Attila Oláh, Para cyclist

In 2010, he started to train professionally. The sport, he says, gave him strength; taught him perseverance, to accept himself, and to be more open toward people. “It taught me to fight, and I started to have dreams and goals, which I achieved!”

After five months of training, Attila won two silver medals at the European Championship. Over the last 10 years, he has received several other medals

After six years of training and overcoming several challenges and sicknesses, Attila participated in the 2016 Paralympics in Rio de Janeiro. He then decided to compete only in Romania and Hungary, at races where everyone is healthy, except him. “I got tired of international competitions. I saw and experienced many things, but I feel like I don’t belong there anymore; it is almost impossible to get good results clean in a world championship”.

As a part of doing something new, he established, together with his wife, an NGO, called the Kendu Association. “Our goal was to create an association through which I can continue to race, but we also wanted to help people with disabilities. Our association carries out quite colorful activities; we organise competitions, charitable cycling, motivational presentations. We work with children, adults, people with disabilities and people with special educational needs,” he says.

During the pandemic, the athlete attended several online, charitable competitions as well: He registered online, paid the entry fee (which goes to charity), completed the selected distance and sent proof of this to the organisers. “I like to do charity because many people helped me as well. It feels good to help others now; I want to give back everything I received over the years”.