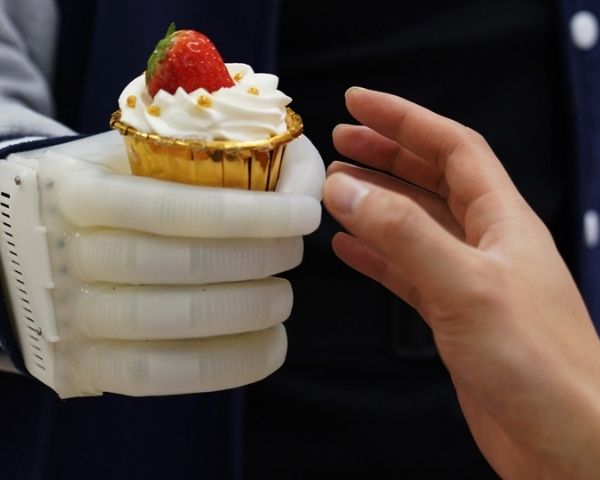 Technology August 24, 2021
0
A team of engineers from the Massachusetts Institute of Technology and Shanghai Jiao Tong University has developed a lightweight, soft neuroprosthetic hand that is both affordable and more comfortable than rigid prosthetics. Amputees have tested the hand for performing daily activities including stroking a cat and pouring juice.

The prosthesis industry has made great strides in developing products that are effective for the world’s more than 5 million people who have undergone upper-limb amputations. The commercial market is seeing a rapid growth in neuroprosthetics, which are highly articulated bionic limbs that recognize and mimic a subject’s residual muscle signals.

Neuroprosthetics, however, are typically quite expensive and make use of metal skeletons with heavy electric motors. This makes them heavy and rigid.

A challenge that engineers at the Massachusetts Institute of Technology, United States and Shanghai Jiao Tong University in China, have addressed with the development of a soft, lightweight, and potentially affordable neuroprosthetic hand. Amputees have tested the design by pouring juice and stroking cats. Their results were better than those of more rigid neuroprosthetics.

It has a tactile feedback system that enables the amputee to experience some primitive sensation in their residual limb. In addition, the design is durable, as it recovered quickly if struck with a hammer or run over with a car.
It is soft and elastic and is made with the commercial elastomer EcoFlex. The hand weighs about half a pound and the component cost is around $500 – a fraction of the weight and material price associated with more rigid smart limbs. Each of the five fingers has segments of fiber embedded into it, like the bones of actual fingers. Three slender digits connect to a virtual “palm” that resembles a human hand.

This is not a product yet, but the performance is already similar or superior to existing neuroprosthetics, which we’re excited about. There’s huge potential to make this soft prosthetic very low cost, for low-income families who have suffered from amputation. – Xuanhe Zhao, Professor, Mechanical, Civil, and Environmental Engineering, Massachusetts Institute of Technology

Prof. Zhao and his team have published their work in the Nature Biomedical Engineering.

Instead of using motors attached to each finger to control position, the researchers used an air-powered pneumatic system to precisely inflate and bend the fingers. A small pump and valves are part of the system, which can be worn at the waist to reduce the prosthetic’s weight.

To take their design a step further, the researchers included tactile feedback, which is not included in the majority of commercial neuroprosthetics. For this, they stitched a pressure sensor to each fingertip, which produces an electrical signal proportional to the pressure sensed. The sensors are wired to specific points on an amputee’s residual limb, so the user can feel the thumb pressed as opposed to the forefinger.

Two volunteers with upper-limb amputations participated in the study. In order to learn how to use it, they contracted their arm muscles repeatedly while picturing five common grasps. They were then asked to perform some tasks to demonstrate their manual strength and dexterity, such as turning pages, writing with a pen, lifting heavy balls, and picking up fragile objects. The researchers repeated the same tasks with a more rigid bionic hand and found that the inflatable prosthetic was just as good, if not better, at most tasks.

They plan to improve the sensor and range of motion, and have filed a patent through MIT. “We now have four grasp types. There can be more,” Zhao says. “This design can be improved, with better decoding technology, higher-density myoelectric arrays, and a more compact pump that could be worn on the wrist.”

The design of the robot will also be customized for mass production, so that soft robotics can benefit society.