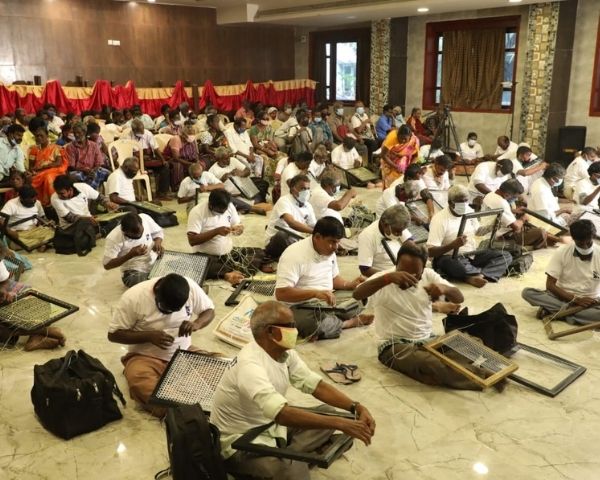 As part of International disabilities day, 50 visually impaired people in Tamil Nadu weaved 50 chairs in six hours to set a world record on 2 December. Organized by UNICO Charitable Trust and Indian Blind Welfare Trust, the event was a grand success.

On 2 December, 50 visually impaired people from Tamil Nadu (TN) set a world record. In order to promote awareness about disabilities and also show that disabled people are competent in jobs, all 50 visually impaired people who hail from different parts of TN attempted a world record by weaving 50 chairs in six hours. The event that was held in Chennai was organized by UNICO Charitable Trust and Indian Blind Welfare Trust (IBWT).

The many struggles of visually impaired people

For people like Chitra who are struggling to find ways to support herself and her family, a job is inevitable. Since most people have now switched over to using plastic chairs, Chitra who has been weaving chairs since childhood, finds it hard to get employment. Matters became worse after Covid pandemic. Chitra’s is not an isolated case. There are tens of thousands of visually impaired people searching for answers during these tough times.

Organized ahead of International disabilities day which was on 3 December, organizers believe that the event would also provide an apt platform for participants to prove themselves. All Covid safety protocols were followed at the venue. Renowned government officials who were chief guests at the event extended their support to the visually impaired.

All participants were provided free food after the event. “Since most of them come from economically backward families, one meal a day free of cost means a lot to them. Most of them do not even have a home”, says R Sivaraman from IBWT.

K Narayanan from UNICO says, “It was unbelievable to see how each of them did a remarkable job. They can make such wonderful products in spite of lack of vision. We started the event at 10 am and ended at 3 pm. The participants were cheered and encouraged. Chief guests motivated them. I’am sure these participants are going to reach bigger heights”, she says.

“Visually impaired people are often supported when they are kids, but what about once they become an adult? Our organization wants to bring awareness that they too can do jobs like everyone else. There are no dearth of talents from the visually impaired community. We got some great responses in spite of doing something like this for the first time”, adds Sivaraman.