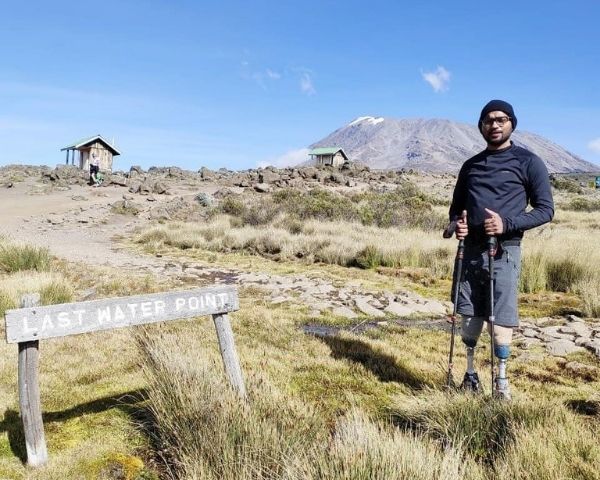 Amputee mountaineer Chitrasen Sahu hopes to achieve yet another record. This time as the first bilateral amputee from India to scale Europe’s highest peak Mount Elbrus. His mission is to scale the highest peaks on seven continents.

Mountains covered with snow, sharp winds, and poor visibility. A climb up Mount Elbrus, Europe and Russia’s highest and most prominent peak, is certainly not for the faint of heart.

Chitrasen Sahu, an amputee mountaineer, plans to take on Mount Elbrus, the tenth tallest mountain in the world at 5,642 meters above sea level, as part of the Seven Summits challenge. Sahu will leave India for Russia today to join a team of international mountaineers climbing the peak.

Every mountain has its challenges and Mount Elbrus is no different. The winds are fierce and its entirely snow covered, with erratic weather conditions. I will be using crampons while scaling this mountain which will add to the overall weight and make this quite challenging. The other major challenge is that the temperature falls to -25 degrees. – Chitrasen Sahu, Amputee mountaineer

Sahu hopes to reach the summit on 23 August. He is the only Indian on the international team and the only bilateral double amputee to attempt it. Injury and COVID-19 prevented Sahu from attempting this challenge in 2020.

He says that the pandemic made it impossible for him to train for this challenge, as gyms closed down. “I had increased my outdoor adventures earlier and this resulted in severe injuries. While climbing in India, my artificial leg developed cracks”. He has changed his routine now and hopes that the increased focus on fitness and maintaining hydration levels will prove useful.

The summit challenge is Sahu’s third. He has scaled Mount Kilimanjaro, Africa’s highest peak, and Mount Kothiarath, Australia’s highest peak. Including Mount Everest, he plans on conquering the seven highest peaks on every continent. Additionally, he set a record for skydiving from 14,000 feet.

An accident left Sahu with disabilities in both legs. Rather than bow down to his disability, he embraced it. In addition to being a wheelchair basketball player, blade runner, and mountaineer, he is also a motivational speaker.

“With Mount Elbrus, I would have completed three summit challenges. This is important to me as I aim to change attitudes towards disability by achieving this. That’s why I call it Mission Inclusion”.